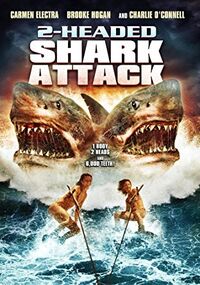 Unknown processes have caused a great white shark off the coast of an atoll of islands to be born with a second head; the shark then attacks the passengers of a Semester at Sea ship.

The 2-Headed Shark is nearly identical to a typical great white shark, the only difference being that it has two heads side-by-side.

The 2-Headed Shark possesses the following powers and abilities:

The shark is killed after it is tricked into biting the onboard motor of a speedboat, causing the motor to explode.

Add a photo to this gallery
Retrieved from "https://movie-monster.fandom.com/wiki/2-Headed_Shark?oldid=404"
Community content is available under CC-BY-SA unless otherwise noted.