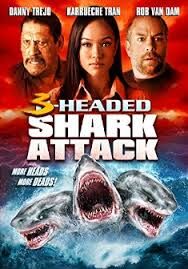 Due to pollution, a shark off the coast of an atoll of islands was born with three heads and advanced regenerative capabilities. Unfortunately, the heads do not get along and are becoming more aggressive with each other.

The 3-Headed Shark is nearly identical to a typical great white shark, the only difference being that it has three heads side-by-side.

The 3-Headed Shark possesses the following powers and abilities:

The shark is killed after Stanley sacrifices himself to the shark, causing the shark to bite its own heads off in its feeding frenzy. The shark, now left with one head, dies of blood loss.

Add a photo to this gallery
Retrieved from "https://movie-monster.fandom.com/wiki/3-Headed_Shark?oldid=405"
Community content is available under CC-BY-SA unless otherwise noted.