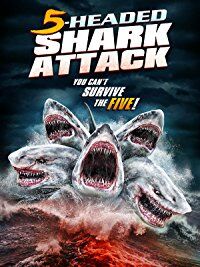 Due to pollution, a shark off the coast of an atoll of islands was born with four heads and an insatiable appetite. After interrupting a photoshoot, the shark goes on a killing spree.

The 5-Headed Shark is nearly identical to a typical great white shark except for some differences. At the film's start, the shark possesses four heads next to each other; however, halfway through the film, the shark's tail fin transforms into a fifth head. The shark also possesses two pectoral fins.

The 5-Headed Shark possesses the following powers and abilities:

The shark is killed after it is blown up by the main characters.

Add a photo to this gallery
Retrieved from "https://movie-monster.fandom.com/wiki/5-Headed_Shark?oldid=3780"
Community content is available under CC-BY-SA unless otherwise noted.