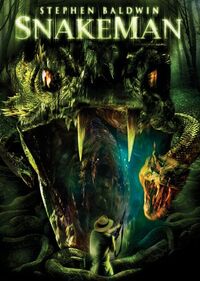 The 5-Headed Snake is the main antagonist of the 2005 American horror film The Snake King.

The 5-Headed Snake is a gigantic ancient beast worshipped by the Snake People, an isolated tribe located deep in the bowels of the Amazon Rainforest.

The 5-Headed Snake is an enormous viper-like snake with brown scales, five heads (four of them smaller than the main head), and horns or spikes on its main head.

The 5-Headed Snake possesses the following powers and abilities:

The snake survives the events of the film and kills all but the two main protagonists.

Add a photo to this gallery
Retrieved from "https://movie-monster.fandom.com/wiki/5-Headed_Snake?oldid=1181"
Community content is available under CC-BY-SA unless otherwise noted.