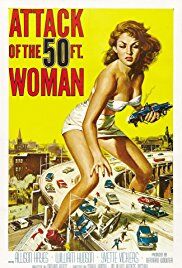 Enormous size
The 50-foot Woman, real name Nancy Archer, is the main antagonist of the 1958 American science fiction-horror film Attack of the 50 Foot Woman and its 1993 remake of the same name.

1993
Community content is available under CC-BY-SA unless otherwise noted.
Advertisement