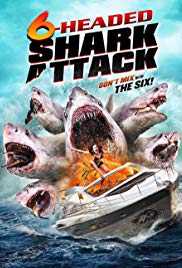 The attendees of a remote island marriage boot camp have to work together to survive when a mutant six-headed shark attacks.

The 6-Headed Shark is shaped somewhat like a 7-pointed starfish with six of the points being great white shark heads and the seventh point being a shark tail.

The 6-Headed Shark possesses the following powers and abilities:

The shark is killed after it is stranded on some rock and blown up by a flare fired at some nearby explosives.

Add a photo to this gallery
Retrieved from "https://movie-monster.fandom.com/wiki/6-Headed_Shark?oldid=2399"
Community content is available under CC-BY-SA unless otherwise noted.