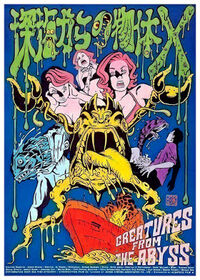 The Abyss Creature is the main antagonist of the 1994 Italian horror film Creatures from the Abyss.

When five teens partying on a dinghy spot a large yacht, they climb aboard to avoid an incoming storm. Unfortunately for them, the yacht is inhabited by a mutated deep-sea fish that was being examined on the ship.

The Abyss Creature is a small stonefish-like creature with bulbous eyes and sharp spines on its back. The mutations that it afflicts on humans include growing fish-like creatures out of long stalks on their back and growing extra jaws and body parts.

The Abyss Creature possesses the following powers and abilities:

The remaining mutated humans are killed after gasoline is dumped throughout the yacht and the boat is blown up.

Add a photo to this gallery
Retrieved from "https://movie-monster.fandom.com/wiki/Abyss_Creature?oldid=2561"
Community content is available under CC-BY-SA unless otherwise noted.