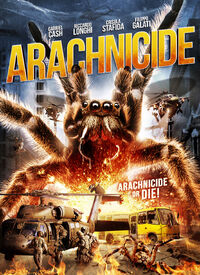 The Albanian Spiders are the main antagonists of the 2014 Italian horror film Arachnicide.

A scientist in Albania invents an incubator device that accelerates the growth of animals and plants placed inside of it, creating a breed of enormous spiders that run amok.

The Albanian Spiders are enormous black and gray tarantulas the size of cars.

The Albanian Spiders possess the following powers and abilities:

The spiders die after their lifespans abruptly come to an end, causing them to drop dead.

Add a photo to this gallery
Retrieved from "https://movie-monster.fandom.com/wiki/Albanian_Spiders?oldid=2426"
Community content is available under CC-BY-SA unless otherwise noted.