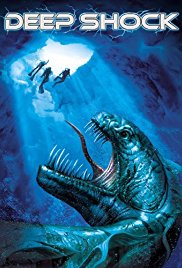 The Alien Eels are the main antagonists of the 2003 American horror film Deep Shock.

When a team of scientists is tasked by the United Nations to investigate an enormous underwater trench that threatens to accelerate the melting of Antarctica, their investigation is threatened by a school of extraterrestrial electric eels.

The Alien Eels are large blue creatures that resemble electrified moray eels. Their heads are fairly dragon-like, with ear-like fins behind their heads and large cartoony eyes.

The Alien Eels possess the following powers and abilities:

The eels are killed after a nuclear bomb is fired into the trench.

Add a photo to this gallery
Retrieved from "https://movie-monster.fandom.com/wiki/Alien_Eels?oldid=1150"
Community content is available under CC-BY-SA unless otherwise noted.