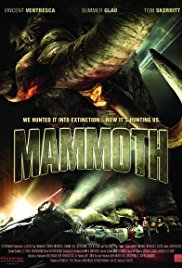 The Alien Mammoth is the main antagonist of the 2006 American comedy-horror film Mammoth.

The Alien Mammoth is a preserved woolly mammoth possessed and resurrected by an alien organism that emerged from a crashed spaceship.

The Alien Mammoth is a typical woolly mammoth measuring approximately 15 feet in height at the shoulder. However, it has patches of missing skin and flesh due to having been preserved for thousands of years.

The Alien Mammoth possesses the following powers and abilities:

The mammoth is defeated after it is frozen solid with liquid nitrogen.

Add a photo to this gallery
Retrieved from "https://movie-monster.fandom.com/wiki/Alien_Mammoth?oldid=752"
Community content is available under CC-BY-SA unless otherwise noted.