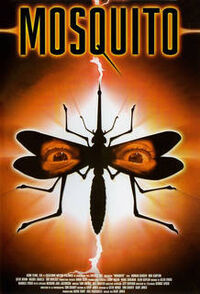 The Alien Mosquitoes are the main antagonists of the 1995 American horror film Mosquito.

When an extraterrestrial craft crash-lands in a United States national park, a mosquito drinks the blood of its pilot and grows to enormous size, infecting a large swarm of mosquitoes as well.

The Alien Mosquitoes possess the following powers and abilities:

The Alien Mosquitoes are trapped in a building, which is then blown up after its gas line is cut.

Add a photo to this gallery
Retrieved from "https://movie-monster.fandom.com/wiki/Alien_Mosquitoes?oldid=2139"
Community content is available under CC-BY-SA unless otherwise noted.