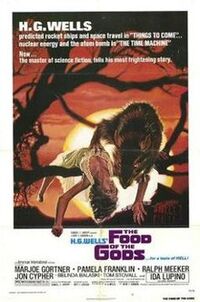 The Altered Rats are the main antagonists of the 1976 American science-fiction horror film The Food of the Gods.

A strange substance bubbling up from the ground on a remote island near British Columbia has caused the rats that feed on it to grow to enormous sizes.

The Altered Rats possess the following powers and abilities:

The Altered Rats are drowned after a dam is destroyed.

Add a photo to this gallery
Retrieved from "https://movie-monster.fandom.com/wiki/Altered_Rats?oldid=1707"
Community content is available under CC-BY-SA unless otherwise noted.