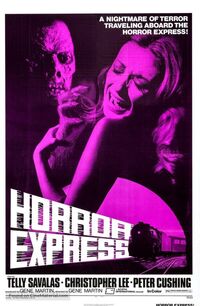 The Ancient Killer is the main antagonist of the 1972 Spanish-British horror film Horror Express.

When a formless alien crash-lands on a primordial Earth, it lives in the bodies of various prehistoric creature before being frozen as a primitive hominid, which is then found by an anthropologist.

The alien is formless, being made entirely of energy. It takes on the form of whatever organism it is possessing.

The Ancient Killer possesses the following powers and abilities:

The alien is killed when the train it is controlling plummets into a canyon.

Add a photo to this gallery
Retrieved from "https://movie-monster.fandom.com/wiki/Ancient_Killer?oldid=2401"
Community content is available under CC-BY-SA unless otherwise noted.