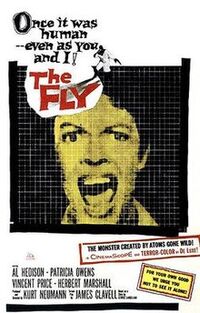 Andrefly, formerly known as André Delambre, is the main protagonist of the 1958 American horror film The Fly.

When scientist André Delambre attempts to teleport himself using a pair of experimental teleportation pods, he is accidentally fused with a housefly that entered the pod with him.

Andrefly is a humanoid creature wearing a white lab coat whose head and left arm are those of a housefly.

Andrefly convinces his wife to kill him by crushing him in a hydraulic press.