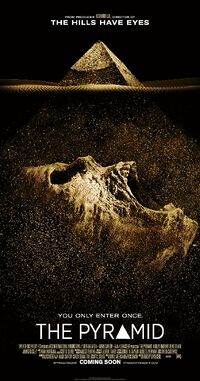 Anubis is the main antagonist of the 2014 American horror film The Pyramid.

Due to the crimes he committed in his attempt to reunite with his father Osiris, Anubis, the Egyptian god of death, was imprisoned within an enormous pyramid for thousands of years.

Anubis is a large, muscular, humanoid creature with grayish scarred skin and a head like that of a jackal.

Anubis survives to the end of the film, being last seen killing Nora in the film's final shot.

Add a photo to this gallery
Retrieved from "https://movie-monster.fandom.com/wiki/Anubis?oldid=2984"
Community content is available under CC-BY-SA unless otherwise noted.