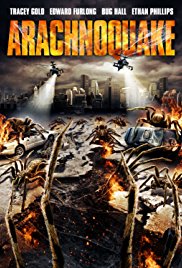 The Arachnoquake Spiders are the main antagonists of the 2012 American horror film Arachnoquake.

Hidden within gas-filled caverns underneath New Orleans for years, these as-of-yet undiscovered arachnids are released to the surface by an earthquake, allowing them to attack the town.

Arachnoquake Spiders are large tarantulas of varying sizes. They possess bone-white exoskeletons with gray and black highlights near the tips of their legs and on their undersides; their bodies also possess sporadic black hairs. Their eyes are black, as are the dotted patterns on their abdomens.

The Arachnoquake Spiders possess the following powers and abilities:

The Arachnoquake Spiders die after the queen is killed, their shared hive mind killing all of the soldier spiders immediately afterward in her absence.

Add a photo to this gallery
Retrieved from "https://movie-monster.fandom.com/wiki/Arachnoquake_Spiders?oldid=1443"
Community content is available under CC-BY-SA unless otherwise noted.