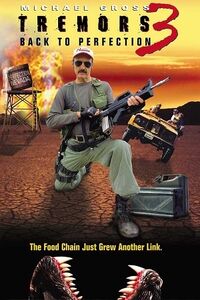 The Ass-Blasters are the main antagonists of the 2001 American comedy-horror film Tremors 3: Back to Perfection and two of its three sequels.

After living for a certain amount of time, Shriekers will undergo a molting process similar to most insects, transforming into an aerodynamic beast capable of launching itself into the air and gliding by combusting two chemicals in their rears like a bombardier beetle.

Ass-Blasters are 4-foot tall bipedal mollusks with a theropod dinosaur-like body shape. Their beaks are similar to those of the Graboids, being made up of a wide upper jaw, a thin lower jaw, and two hooked mandibles; however, their beaks are overall much thinner and longer. Instead of three mouthed tentacles, they possess a single tongue that lacks jaws of its own. On top of their heads, they have an orange, brain-like organ that can open up, allowing them to sense body heat like a pit viper. On their sides, Ass-Blasters produce ray-finned membranes that allow them to glide through the air, soaring on air currents.

The African species are much larger in size and have a darker brown color with black armored plates on its back. Its body shape is more similar to a pterosaur, complete with actual flapping wings rather than just gliding fins. It has large raptor-like talons on its feet, and its head lacks the beak of its American counterpart, having a vertical lamprey-like mouth filled with needle-like teeth.

One of the Ass-Blasters is shot out of the sky, causing it to fall to its death, one of them is blown up along with Burt's house, four of them are killed after a homemade potato gun ignites their internal combustion chemicals, and one of them is eaten by the sterile albino Graboid named "El Blanco". One of them, dubbed Messerschmidt, survives the events of the film and is sold to Las Vegas magicians Siegfried and Roy.