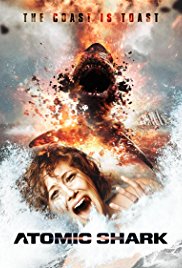 The Atomic Sharks are the main antagonists of the 2016 American horror film Atomic Shark.

Both of the Atomic Sharks are great white sharks that were mutated by leaking radiation from a sunken Russian submarine.

The Atomic Sharks resemble great white sharks in body shape, but their skin is red, glowing, and scarred. They are covered in pus-filled pustules, areas of charred skin, and radiation scars.

The Atomic Sharks possess the following powers and abilities:

The main shark of the film accidentally beaches itself, causing it to overheat and explode. The second shark only appears alive at the end of the film.

Add a photo to this gallery
Retrieved from "https://movie-monster.fandom.com/wiki/Atomic_Sharks?oldid=756"
Community content is available under CC-BY-SA unless otherwise noted.