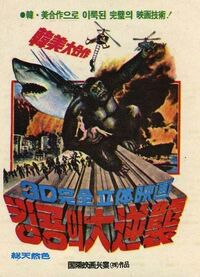 The Attacking Primate MonstEr is the main antagonist of the 1976 American-South Korean kaiju film A*P*E.

An oil tanker carrying an enormous gorilla loses its cargo, which swims to shore and begins attacking the people of South Korea.

The Attacking Primate MonstEr possesses the following powers and abilities:

The ape is killed with a combination of heavy artillery and tanks.

Add a photo to this gallery
Retrieved from "https://movie-monster.fandom.com/wiki/Attacking_Primate_MonstEr?oldid=1989"
Community content is available under CC-BY-SA unless otherwise noted.