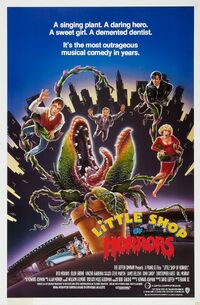 Audrey II is the main antagonist of the 1986 American comedy-horror film Little Shop of Horrors.

Purchased from a Chinese man by young florist Seymour, Audrey II is actually an alien creature who feeds on blood and is prepared to sweet-talk unwary humans into feeding it in exchange for fame and fortune.

Audrey II resembles a large green plant with a head similar in shape to an avocado. It has large lips and a fleshy mouth filled with sharp teeth. The stalk is attached to a thick stem covered in thorns, and it also possesses numerous root-like tentacles.

Audrey II is killed after Seymour electrocutes it with an exposed wire.

Add a photo to this gallery
Retrieved from "https://movie-monster.fandom.com/wiki/Audrey_II?oldid=1425"
Community content is available under CC-BY-SA unless otherwise noted.