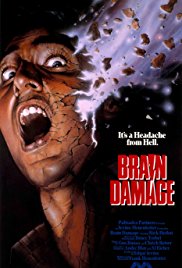 Aylmer is the main antagonist of the 1988 American comedy-horror film Brain Damage.

After his first experience with hallucinogenic drugs, young Brian encounters a centuries-old parasitic creature named Aylmer who used to live with his elderly nature. Aylmer can inject a fluid into Brian's brain that induces a high, but he must feed the creature Brains in order to receive a steady supply.

Aylmer is killed after being strangled and crushed to death by his former host Morris.

Add a photo to this gallery
Retrieved from "https://movie-monster.fandom.com/wiki/Aylmer?oldid=2039"
Community content is available under CC-BY-SA unless otherwise noted.