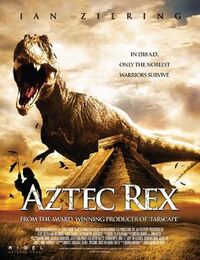 The Aztec Rexes are the main antagonists of the 2008 American horror film Aztec Rex.

The Aztec Rexes are a pair of surviving tyrannosaurs inhabiting Central American, essentially acting as gods to the Aztecs and consuming numerous human sacrifices.

The Aztec Rexes possess the following powers and abilities:

The male Aztec Rex is killed by the conquistadors with cannons and muskets and the female is killed in an explosion involving gunpowder.

Add a photo to this gallery
Retrieved from "https://movie-monster.fandom.com/wiki/Aztec_Rexes?oldid=991"
Community content is available under CC-BY-SA unless otherwise noted.