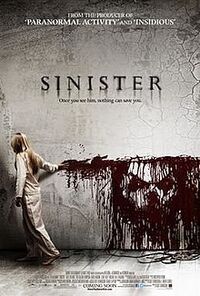 Bagul, also known as Buhguul, is the main antagonist of the 2012 British-American horror film Sinister and its sequel.

When true-crime novelist Ellison Oswalt uncovers and watches a series of morbid Super 8 film strips, he unwittingly releases an ancient Babylonian deity that feeds on children.

Bagul takes the form of a human-like figure with mottled gray skin and stringy, shoulder-length black hair. He has two large milky eyes set deep in his dark sockets, and his mouth appears to be covered with a translucent black membrane. He generally wears a black suit jacket and a salmon-colored collared shirt.

Bagul succeeds in kidnapping young Ashley, taking her into the film strip with him.

Add a photo to this gallery
Retrieved from "https://movie-monster.fandom.com/wiki/Bagul?oldid=1101"
Community content is available under CC-BY-SA unless otherwise noted.