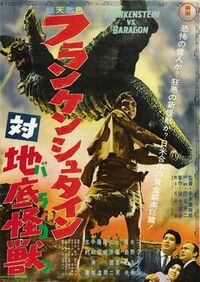 Baragon is the main antagonist of the 1965 Japanese kaiju film Frankenstein vs. Baragon.

When a giant subterranean dinosaur emerges at night to consume livestock and people, Frankenstein's monster is turned into a giant to fight it.

Baragon resembles a large brown quadrupedal dinosaur. It has large eyes, floppy ears, a ridge of spines down its back, and a yellowish horn on its nose. Its legs are thick and it has numerous thick scales on its back. 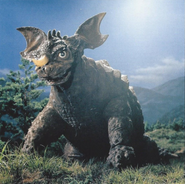 2001
Add a photo to this gallery
Retrieved from "https://movie-monster.fandom.com/wiki/Baragon?oldid=1532"
Community content is available under CC-BY-SA unless otherwise noted.