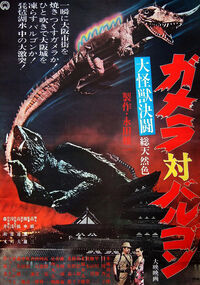 Barugon is the main antagonist of the 1966 Japanese kaiju film Gamera vs. Barugon.

When a prehistoric egg found in a New Guinea cave is mistaken for an opal, it is hatched, releasing a creature that grew to an enormous size in a short time, prompting Gamera to return from space and fight it.

Barugon resembles a large quadrupedal dinosaur or monitor lizard with brownish skin and a crocodilian snout. He has numerous forward-curving spines on his back, sideways-facing eyes, and a large rhino-like horn on the tip of his snout.

Gamera drags Barugon into a cold lake where it drowns. 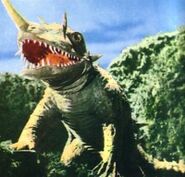 Add a photo to this gallery
Retrieved from "https://movie-monster.fandom.com/wiki/Barugon?oldid=1735"
Community content is available under CC-BY-SA unless otherwise noted.