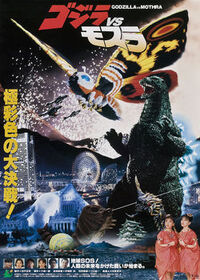 Battra is a major antagonist and later deuteragonist in the 1992 Japanese kaiju film Godzilla vs. Mothra.

Thousands of years after being sealed underground by Mothra, a meteorite released Battra from its Siberian prison, prompting it to make its way to Japan.

Battra is a large black moth-like creature with vertebrate jaws. It has large red eyes, yellow highlights and horns, and black wings with yellow and red flame-like patterns.

While carrying Godzilla with Mothra, Battra is killed after Godzilla rips out its throat and blasts it with the atomic breath at close range.

Add a photo to this gallery
Retrieved from "https://movie-monster.fandom.com/wiki/Battra?oldid=1518"
Community content is available under CC-BY-SA unless otherwise noted.