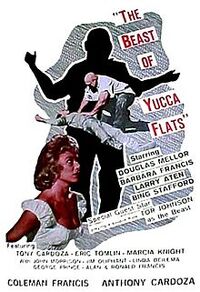 A Russian scientist named Joseph Javorsky flees from the authorities only to be mutated by the radiation at the Yucca Flats nuclear testing site, turning him into a violent monster.

The Beast of Yucca Flats is a large obese Caucasian man with a scarred face. He wears a torn lab coat and a pair of black pants.

The Beast of Yucca Flats possesses the following powers and abilities:

The beast is shot to death by police and dies caressing a small jackrabbit.