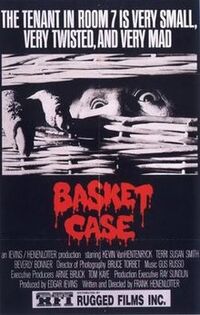 Belial Bradley is the main antagonist of the 1982 American horror film Basket Case and the protagonist of its sequels.

Belial was the conjoined twin of Duane Bradley before doctors forcibly separated them against their will. Along with his brother, Belial now wants revenge on the doctors.

Belial resembles a mass of Caucasian flesh with two arms tipped with sharp fingernails and a deformed face.

Belial and Duane seemingly die after the latter tries to kill the former after the former rapes Sharon, but the sequels show that both survived.