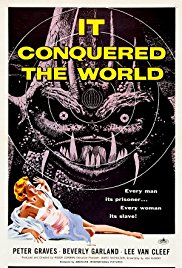 Beluah, also known as the Venusian, is the main antagonist of the 1956 American science fiction-horror film It Conquered the World.

While tinkering with his radio transmitter, Dr. Tom Anderson accidentally comes into contact with an alien from Venus that wants to assimilate the consciousness of all life on Earth into its own hivemind.

Beluah is a vaguely cone-shaped creature with numerous tiny cilia or spikes around its bottom rim. Its face is composed of two small eyes and a large mouth with long tusks protruding from its lower jaw. Beluah has two long arms ending in two-fingered hands, each finger ending in a sharp claw. There are two antennae emerging near the tip of its cone-shaped body.

Dr. Anderson kills Beluah by holding a blowtorch to its face, burning it to death.

Add a photo to this gallery
Retrieved from "https://movie-monster.fandom.com/wiki/Beluah?oldid=2270"
Community content is available under CC-BY-SA unless otherwise noted.