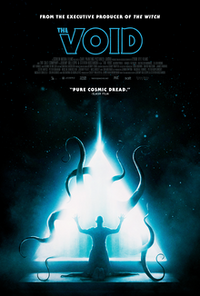 The Beverly Creature is a minor antagonist in the 2016 American horror film The Void.

A nurse at a nearly-abandoned hospital goes insane and kills a patient before mutating into a horrific tentacled beast due to being reanimated from the dead.

The Beverly Creature resembles a female human nurse whose entire torso and legs have been enveloped by an enormous tumorous mass covered in slimy skin and tentacles.

The Beverly Creature possesses the following powers and abilities:

Danny, Vincent, and Simon shoot and axe the creature to death after it kills a sheriff.

Add a photo to this gallery
Retrieved from "https://movie-monster.fandom.com/wiki/Beverly_Creature?oldid=2360"
Community content is available under CC-BY-SA unless otherwise noted.