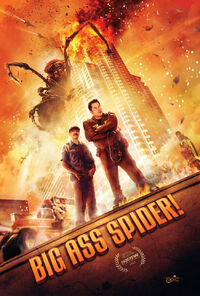 After scientists attempted to use extraterrestrial DNA as an experimental growth hormone, a spider hidden among the test fruit was exposed, causing it to steadily grow to gigantic proportions.

The Big Ass Spider is an enormous blackish-gray spider with eight thin legs and an engorged abdomen that has numerous seams lined with hairs.

The Big Ass Spider possesses the following powers and abilities:

Alex manages to kill the spider by shooting its spinnerets with a rocket launcher, igniting the creature's flammable webbing.

Add a photo to this gallery
Retrieved from "https://movie-monster.fandom.com/wiki/Big_Ass_Spider?oldid=1063"
Community content is available under CC-BY-SA unless otherwise noted.