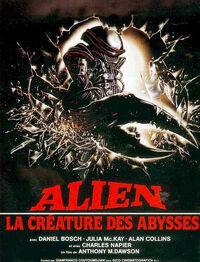 The Big Claw is the main antagonist of the 1989 Italian horror film Alien from the Deep.

An extraterrestrial is lured to Earth by toxic waste being dumped into the ocean, but it mutates and goes on a killing spree near a chemical plant.

The Big Claw is a tall, gangly humanoid with black skin and what appears to be biomechanical tubes wrapped around its limbs. Its head resembles a large bathysphere, and its right arm ends in an enormous, lobster-like claw.

The Big Claw possesses the following powers and abilities:

The creature has all of the hydrogen (which it needs to breathe) sucked out of its body, causing it to fall over and slide down a volcano.

Add a photo to this gallery
Retrieved from "https://movie-monster.fandom.com/wiki/Big_Claw?oldid=2331"
Community content is available under CC-BY-SA unless otherwise noted.