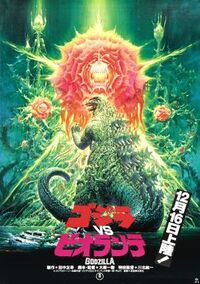 Biollante, formerly known as Erika Shiragami, is the main antagonist of the 1989 Japanese kaiju film Godzilla vs. Biollante.

Dr. Shiragami creates an enormous plant monster by splicing the genes of a rose with those of Godzilla and his deceased daughter Erika in order to keep her alive forever. However, the creature grows out of control and retains Erika's consciousness.

Biollante's Flower Beast form is an enormous, thick, spiky stalk ending in an enormous rosebud. She also has numerous tentacles.

Biollante's Plant Beast form is an enormous hulking creature with a bulky body, an arching back, and a crocodile-like head. In addition to her numerous teeth, she also has several tusks on her upper and lower jaws. On the front of her body is a fleshy orange mass covered mostly by green vegetation, allowing it to peek through. She has numerous stretchy tentacles ending in venus fly trap-like mouths.

After being critically wounded by an atomic blast to the esophagus, Biollante disperses into a cloud of spores and floats into the atmosphere. However, some of her cells are thought to have created SpaceGodzilla. 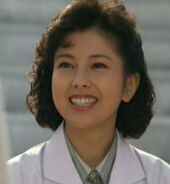