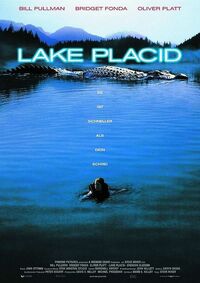 The Black Lake Crocodiles are the main antagonists of the 1999 American horror film Lake Placid and its sequels.

After they followed her husband home one night (and then ate him), elderly Mrs. Bickerman has been feeding two gigantic crocodiles in Black Lake to keep them at bay, but the constant stream of food has made them abnormally large and aggressive.

The Black Lake Crocodiles are enormous 30-foot saltwater crocodiles with black scales covering most of their bodies aside from the lighter scales on their underbellies.

The Black Lake Crocodiles possess the following powers and abilities:

One of the crocodiles is trapped underneath a helicopter and blown up with a grenade launcher and the other is kept alive and placed on a flatbed truck to be taken away for study.

Add a photo to this gallery
Retrieved from "https://movie-monster.fandom.com/wiki/Black_Lake_Crocodiles?oldid=758"
Community content is available under CC-BY-SA unless otherwise noted.