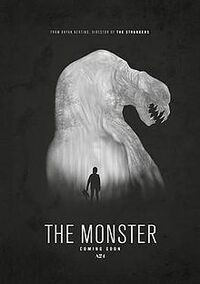 The Black Reptilian is the main antagonist of the 2016 American horror film The Monster.

A mother and daughter with a strained relationship are stranded in the woods after a car accident, causing them to be stalked by a strange reptilian beast.

The Black Reptilian is a tall humanoid creature with reptilian features, including black scales and a dinosaur-like head filled with needle-like teeth.

The Black Reptilian possesses the following powers and abilities:

Lizzy sets the beast on fire with a spray can and a lighter and then beats the flaming creature to death with a stick.

Add a photo to this gallery
Retrieved from "https://movie-monster.fandom.com/wiki/Black_Reptilian?oldid=2074"
Community content is available under CC-BY-SA unless otherwise noted.