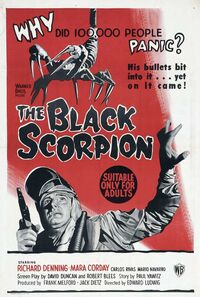 The Black Scorpions are released from their underground lost world of gigantic invertebrates by the eruption of a dormant volcano caused by an earthquake, causing them to go on a rampage through Mexico.

The Black Scorpion possesses the following powers and abilities:

The Black Scorpion is killed after an electrical charge attached to a spear is detonated in its throat, its only vulnerable spot.

Add a photo to this gallery
Retrieved from "https://movie-monster.fandom.com/wiki/Black_Scorpion?oldid=3714"
Community content is available under CC-BY-SA unless otherwise noted.