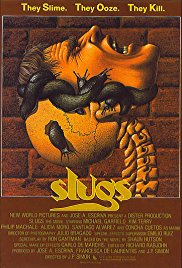 The Black Slugs are the main antagonists of the 1988 American/Spanish horror film Slugs.

The dumping of radioactive waste caused these gastropods to mutate into ravenous, human flesh-eating monsters.

The Black Slugs are large black slugs of the species Arion ater. Rather than radulas, they appear to have vertebrate-like mouths, complete with teeth.

The Black Slugs possess the following powers and abilities:

The Black Slugs are killed after poison is dumped into the sewers they live in, killing them all. 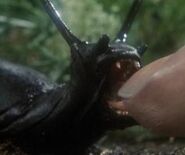 Add a photo to this gallery
Retrieved from "https://movie-monster.fandom.com/wiki/Black_Slugs?oldid=817"
Community content is available under CC-BY-SA unless otherwise noted.