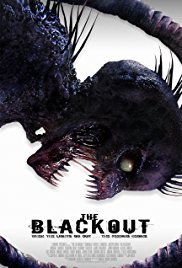 The Blackout Creatures are the main antagonists of the 2009 American horror film The Blackout.

Previously dwelling underneath the surface of the American West Coast, these ferocious creatures were released to the surface by mysterious seismic activity, where they attacked the tenants of The Ravenwood apartment complex.

The Blackout Creatures are tall, thin humanoid creatures with pitch-black skin. Their heads have lipless mouths filled with anglerfish-like teeth and pale green eyes. They have numerous black quills running down their backs, and their tails are tipped with large claws.

The Blackout Creatures possess the following powers and abilities:

The Blackout Creatures are killed after being shot and stabbed in their only weak spots: their heads.

Add a photo to this gallery
Retrieved from "https://movie-monster.fandom.com/wiki/Blackout_Creatures?oldid=818"
Community content is available under CC-BY-SA unless otherwise noted.