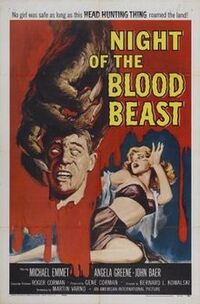 The Blood Beast, also known as Steve, is the main antagonist of the 1958 American horror film Night of the Blood Beast.

A team of astronauts is killed by a strange creature that implants its cells in one of their bodies to impregnate them, planning to reproduce on Earth and take over the human race to "save it".

The Blood Beast is a tall humanoid creature with long, filthy hair covering its body. Its arms end in enormous sloth-like claws. Its mouth is vaguely beak-like, similar in shape to a sea turtle. It has two large black eyes on each side of its head.

The Blood Beast possesses the following powers and abilities:

The Blood Beast is killed after explosives are thrown at it. 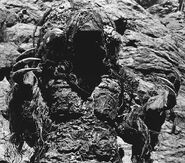 Add a photo to this gallery
Retrieved from "https://movie-monster.fandom.com/wiki/Blood_Beast?oldid=2086"
Community content is available under CC-BY-SA unless otherwise noted.