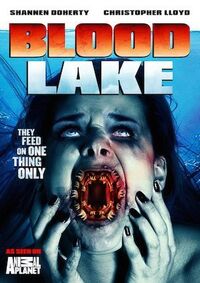 The Blood Lake Lampreys are the main antagonists of the 2014 American horror film Blood Lake.

When the fish population of a lakeside Michigan town falls too low, the starving lampreys that once fed on them turn to humans for food and gain the ability to swim through the town's plumbing.

The Blood Lake Lampreys possess the following powers and abilities:

After they are lured to one place, the lampreys are all electrocuted en masse. However, one is shown to have survived later when it attacks a clean-up worker.

Add a photo to this gallery
Retrieved from "https://movie-monster.fandom.com/wiki/Blood_Lake_Lampreys?oldid=1762"
Community content is available under CC-BY-SA unless otherwise noted.