Blue, Delta, Echo and Charlie are a pack of trained Velociraptors owned by Owen Grady who appear as major protagonists in the 2015 sci-fi action film Jurassic World. Only Blue returns in the 2018 sequel Jurassic World: Fallen Kingdom, serving as a deuteragonist.

Blue is a Velociraptor with bluish-gray skin and a white stripe with metallic blue in the middle going horizontally from her eye orbit, with one side has blue around the eye, while the other side's stripe stop so at the head, down to the tip of her tail. Delta is another raptor who is teal, but with no stripes on her back or tail. She also has a unique head from the other raptors by having extra nodules toward the front of her nose and past the eye ridges. Another raptor, Echo, is brown with dark blue striping as well as having dark blue around her eyes. The most noticeable trait of Echo is a scar on the left side of her muzzle. Because of the dark blue around her eyes, she can easily be confused for her packmate Blue. Finally, the last raptor, Charlie, is green with black vertical stripes running down her back.

Only three of the raptors are killed in Jurassic World, leaving Blue as the last remaining one left; Charlie is killed when an InGen trooper launched a missile at her, Delta is thrown against a burner where she is incinerated and Echo is snatched by the jaws of the Indominus rex and thrown away. In Jurassic World: Fallen Kingdom, after being transported off Isla Nublar due to a volcanic eruption and later killing the Indoraptor before then escaping from Lockwood Manor along with all the other dinosaurs, Blue is seen over-looking a suburban California neighborhood. 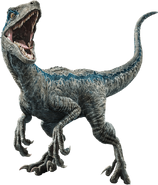 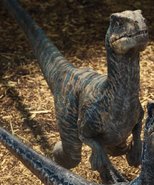