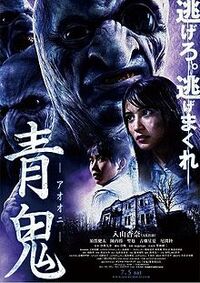 The Blue Demon is the main antagonist of the 2014 Japanese horror film Ao Oni.

When a group of six friends enters a supposedly cursed mansion, they are stalked by a distorted blue creature intent on killing them.

The Blue Demon is a large blue humanoid figure. Its head is nearly the size of the rest of its body. It has a large nose, a snarling mouth, and large human-like eyes.

The Blue Demon possesses the following powers and abilities:

The demon is last seen killing Hiroshi before Anna successfully escapes the mansion. It is presumed that it still stalks the house.

Add a photo to this gallery
Retrieved from "https://movie-monster.fandom.com/wiki/Blue_Demon?oldid=2090"
Community content is available under CC-BY-SA unless otherwise noted.