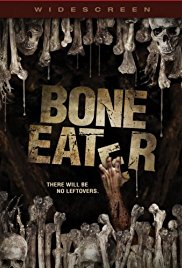 The Bone Eater is the main antagonist of the 2008 American horror film Bone Eater.

A construction crew desecrating a Native American burial ground in order to build a resort hotel accidentally release an ancient spirit known as the Bone Eater, the guardian of the burial ground.

The Bone Eater resembles a large human skeleton with numerous copies of each bone making up its body. Its head has a "crest" of sorts made of arm and leg bones, and it has glowing green eyes. It also wears a gray loincloth around its hips.

The Bone Eater possesses the following powers and abilities:

The Bone Eater is destroyed after a magical axe is thrown into its chest. 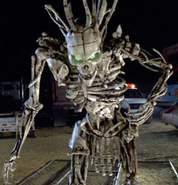 Add a photo to this gallery
Retrieved from "https://movie-monster.fandom.com/wiki/Bone_Eater?oldid=831"
Community content is available under CC-BY-SA unless otherwise noted.