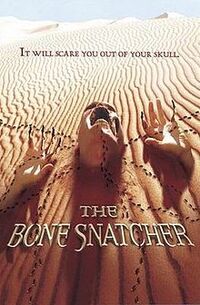 When the members of a diamond mining crew in South Africa start disappearing, the search party sent to find them discovers that a hivemind colony of ants with the ability to animate the skeletons of their prey is to blame.

The Bone Snatcher possesses the following powers and abilities:

The Bone Snatcher is killed by Dr. Zack Straker, who manages to kill the queen ant, causing the rest of the colony to die as well due to their hivemind connection.

Add a photo to this gallery
Retrieved from "https://movie-monster.fandom.com/wiki/Bone_Snatcher?oldid=2131"
Community content is available under CC-BY-SA unless otherwise noted.