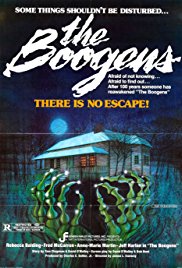 The Boogens are the main antagonists of the 1981 American horror film The Boogens.

When a construction team reopens a condemned silver mine, they inadvertently release from it a group of man-eating reptilian creatures.

Boogens are large green reptilian creatures similar to turtles. Their shells are wrinkled and resemble brains, and their heads have two large black eyes and sharp teeth. Their forelimbs are long and tentacle-like, ending in sharp clubs. They also have two other limbs that end in crab-like claws.

The Boogens are killed after the mineshaft is blown up with dynamite.

Add a photo to this gallery
Retrieved from "https://movie-monster.fandom.com/wiki/Boogens?oldid=2115"
Community content is available under CC-BY-SA unless otherwise noted.