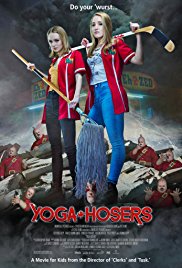 The Bratzis are the main antagonists of the 2016 American comedy-horror film Yoga Hosers.

The Bratzis are 1-foot tall anthropomorphic bratwurst sausages that are dressed in red Canadian Mountie uniforms. As they are sausages, they are obese and bloated, with thick fingers and noticeable double chins. They have human faces and Adolf Hitler-style mustaches.

The Bratzis possess the following powers and abilities:

The Bratzis are eventually killed while piloting the Goalie Golem by Colleen and Colleen, who utilize their yoga skills.