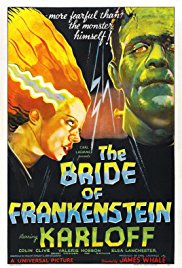 When both Henry Frankenstein and his monster survive the burned down windmill they were trapped in, Henry works with his colleague Dr. Pretorius to create a mate for the creature.

The Bride is a tall woman with greenish skin. She wears a white floor-length dress, has bolts in her neck, and has a large black beehive hairdo with a white, lightning bolt-shaped streak running down it.

The Bride of Frankenstein possesses the following powers and abilities:

The Bride is killed after the monster, angry at being rejected by her, pulls a lever that causes the tower they're in to collapse. 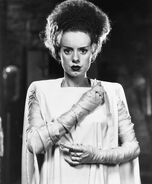 Add a photo to this gallery
Retrieved from "https://movie-monster.fandom.com/wiki/Bride_of_Frankenstein?oldid=2015"
Community content is available under CC-BY-SA unless otherwise noted.