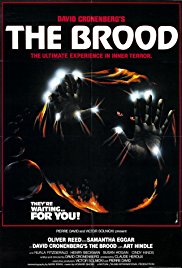 The Broodlings are the main antagonists of the 1979 Canadian horror film The Brood.

When Dr. Hal Raglan develops a psychotherapeutic technique that causes patients to manifest their mental illnesses as strange physical abnormalities, a woman named Nola Carveth parthenogenetically gives birth to a group of child-sized creatures that kill those she is upset with.

The Broodlings resemble Caucasian human children wearing snow suits of various colors and blond hair. Their faces are slightly more animalistic than most humans, and they lack both retinas and navels.

The Broodlings possess the following powers and abilities:

Frank chokes Nola to death, causing the Broodlings to die without her psychic influence.

Add a photo to this gallery
Retrieved from "https://movie-monster.fandom.com/wiki/Broodlings?oldid=2412"
Community content is available under CC-BY-SA unless otherwise noted.