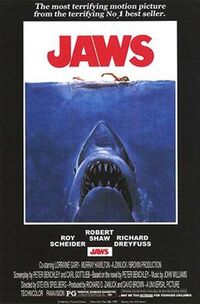 Bruce is the main antagonist of the 1975 American horror film Jaws.

Bruce was the unofficial name of a gigantic great white shark that terrorized the shores of Amity Island, a small resort town in Massachusetts.

Bruce is an abnormally large great white shark measuring between 25 and 30 feet in length. One of his most prominent features is his soulless black eyes.

Bruce is killed when Sheriff Brody stuffs a pressurized air tank in his mouth and then shoots it with a rifle, causing it (and the shark) to explode. 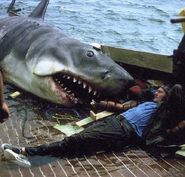 Add a photo to this gallery
Retrieved from "https://movie-monster.fandom.com/wiki/Bruce?oldid=2894"
Community content is available under CC-BY-SA unless otherwise noted.