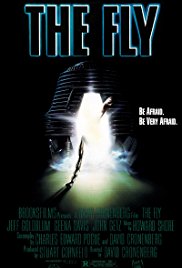 Brundlefly, formerly known as Seth Brundle, is the main protagonist and later antagonist of the 1986 American horror film The Fly.

Once a scientist under the employ of Bartok Industries, Seth Brundle had secretly invented a pair of teleportation pods that could move objects and creatures between them. However, after failing to notice the fly next to him during an experiment in teleporting himself, Seth Brundle began undergoing a slow transformation into a human/fly hybrid.

Brundlefly is a tall, hunched-over humanoid creature with diseased flesh tone skin and sporadic hairs. His head possesses two large human-like eyes, no visible mouth, and two small antennae between the eyes. His left hand is reduced to a stump with vestigial fingers and his right hand is a strange insectoid claw.

After the teleportation sequence commences while Brundlefly is partially outside of it, he is fused with the mechanical parts of the pod itself. Reduced to a dying cyborg creature crawling on the floor, Brundlefly uses the last of his humanity to beg his lover Veronica to put him out of his misery. Reluctantly, she complies, blowing his head apart with a shotgun.